Are you looking for a roof replacement, but aren’t sure if you should get a hip roof or a gable roof? We’ll go over the pros and cons of each.

The style of roof you choose for your property can have a big impact on how it fares in severe weather conditions. The differences between hip and gable roofs go further than the aesthetics. Both are popular styles, but there are distinct pros and cons to each one that you need to know about if you’re planning on installing a new roof.

From the pros and cons and the roofing cost of each type to different variations to consider, we’ve got you covered. Read on to discover everything you need to know when it comes to choosing between a hip roof and a gable roof.

What Is a Hip Roof?

Also known as a hipped roof, a hip roof is one that has sloping sides, but is without a flat face. For example, on a traditional build, all four sides of the roof slope downwards from the peak.

This roof type is popular on church steeples with high pitches, and can often be found in houses in the suburbs. All the walls beneath the roof are of the same height, meaning hip roofs are easy to build, and consequently are popular with developers. There are lots of different designs of hipped roofs, each with its own unique style and function. Simple hip roofs are the most common type and feature a ridge over the central portion of the roof which creates the distinctive shape of two triangle sides and two polygons at the front and back.

The half-hipped roof is a version of the basic hip roof design, but with one key difference. The two triangular sides of the roof are shorter, creating eaves.

Another popular design is the pyramid hip roof. As the name suggests, it is comprised of four equal triangular sides which all meet at a single point at the top of the roof.

For larger or more irregular shapes properties, you may also encounter the cross-hipped roof. It appears as though two hipped roof buildings have been fused together, with the two roof sections meeting to create a seam. This seam is also known as the ‘valley’ and is the core element of the cross-hipped roof.

Pros and Cons of a Hip Roof

Hip roofs have lots of benefits, but there are some drawbacks too. Whether or not your property would benefit from a hip roof depends on a number of factors including what attic space you want and what climate conditions you regularly face. Here are some of the main pros and cons to help you decide whether or not a hip roof is a right choice for you.

First of all, hip roofs are a great choice if you often experience high winds in your area. They are incredibly stable and do well even against extreme winds, as they have no flat face for the wind to catch.

Because of their strong performance in high winds, some insurance companies offer hip roof homeowners living in areas at risk of hurricanes a discount on their policy. This discount can be worth up to 32%, so it is well worth looking into if you live in an area with high winds, like Florida for example.

High winds aren’t the only weather condition hip roofs can easily cope with, however. The four-way slope structure means rainwater can run off it with ease, as well as any debris.

Another advantage of hip roofs is that they are easy to construct. Unlike gable roofs, they don’t require any additional bracing, and all the walls are the same height.

On the other hand, there are some disadvantages of hip roofs to consider. Though water can roll off easily, they are not as effective at shedding snow due to their lower pitch.

If you live in an area that sees heavy snow, you should look into designing a specially designed hip roof with proper winter performance and protect your roof using ice and water protector during the winter months. Hip roofs also tend to have less space for an attic than gable roofs. This is because they require diagonal bracing that reduces the room. A solution is to include dormers on hip roofs in order to gain extra space as well as natural light.

Although hip roofs are easier to build, they are also more costly. They require more roofing materials and can be more challenging to design than a gable roof.

What Is a Gable Roof?

While a hip roof has no flat sides, a gable roof features at least one flat end, also known as a gable. It has two sloping sides that meet in the middle and form a ridge, creating triangular shapes at either end. As with the hip roof, there are several variations of gable roofs. Here, we will run you through the most popular designs. A box gable roof is very similar to the standard gable design, but there is more emphasis on the triangular section of the roof. A front gable roof features a gable at the front of the property, often positioned above the front door. This style is common in Colonial-style homes but is increasing in popularity.

A cross gable roof combines two gable sections at a right angle to each other and is often used for houses with more complex layouts. For instance, cross gable roofs are appropriate for homes with an attached garage, large porch area, or separate wings.

If you’re looking to extend your property, a gable roof with a shed roof addition is a popular solution. This hybrid design allows for more space and headroom without the need to totally change the existing structure or aesthetics of the roof.

Finally, another style becoming more popular is the saltbox roof, which features one end of the roof that extends further out than the other. This asymmetrical style is both visually appealing and also creates more space inside the property.

Pros and Cons of a Gable Roof

If you are looking into gable roofing and are trying to work out if it is the right option for your property, we’ve got you covered. Here are the main advantages and disadvantages of gable roofs so you can make an informed decision.

The main advantage of gable roofs is the cost. They tend to be less expensive than hip roofs due to fewer overall roofing materials. For example, an open gable roof has just two roof planes, where a hip roof has four. This means that though you have to buy more of the siding material, it will still cost less than the alternative.

A gable roof is a good option for those wanting more generous headroom in a loft conversion and better ventilation to the attic area. Good attic ventilation is important if you want to keep your roof and your wider home in good condition. A gable roof with fitted gable vents can help release excess moisture and reduce humidity.

Gable roofs are often chosen for their aesthetic, as they have more scope for decoration and individual design than hip roofs. You can buy pediments and brackets in a wide range of styles and materials to suit many tastes, whether modern and simplistic or traditional and unique.

While gable roofs certainly have a lot of pros, there are also some cons to keep in mind when choosing which roof type is best for your home.

Though they shed snow and rain easily, gable roofs do not hold up as well during periods of extreme weather or high winds. The gable is a flat surface that the wind can hit and move up the face to the roof. You need to be especially careful if there is an overhanging section on your gable, as the strongest winds could even pull up the truss of your roof.

For this reason, it is suggested to keep any overhang on your gable to under 30 inches in areas that often see high winds. If you are in any doubt, be sure to contact your architect who can advise you of how to build according to any specific codes or conditions.

Gable roofs are harder to build than hip roofs because the walls are of various heights in order to allow for the shape of the roof. To improve wind resistance, gable roofs often need extra brackets, which further extend the build time.

Can a Roof Have Both Hips and Gables?

There are also many roof designs that incorporate both hips and gables in order to get the best of both worlds. An intersecting roof (also known as an overlaid hip roof) is one that appears as though a hip roof has been laid over a gable with a 90-degree angle. Meanwhile, the Dutch gable roof is more of a subtle merge between a gable and a hip roof. It has the base of a hip roof with the gable roof on top, allowing for more loft space.

The short answer is yes, hipped roofs are generally more expensive due to their more complex designs. Gable roofs have simpler designs and less required building materials, so tend to be cheaper. The longer answer is that the cost will be different for every home as it depends on more than just the style of roof. 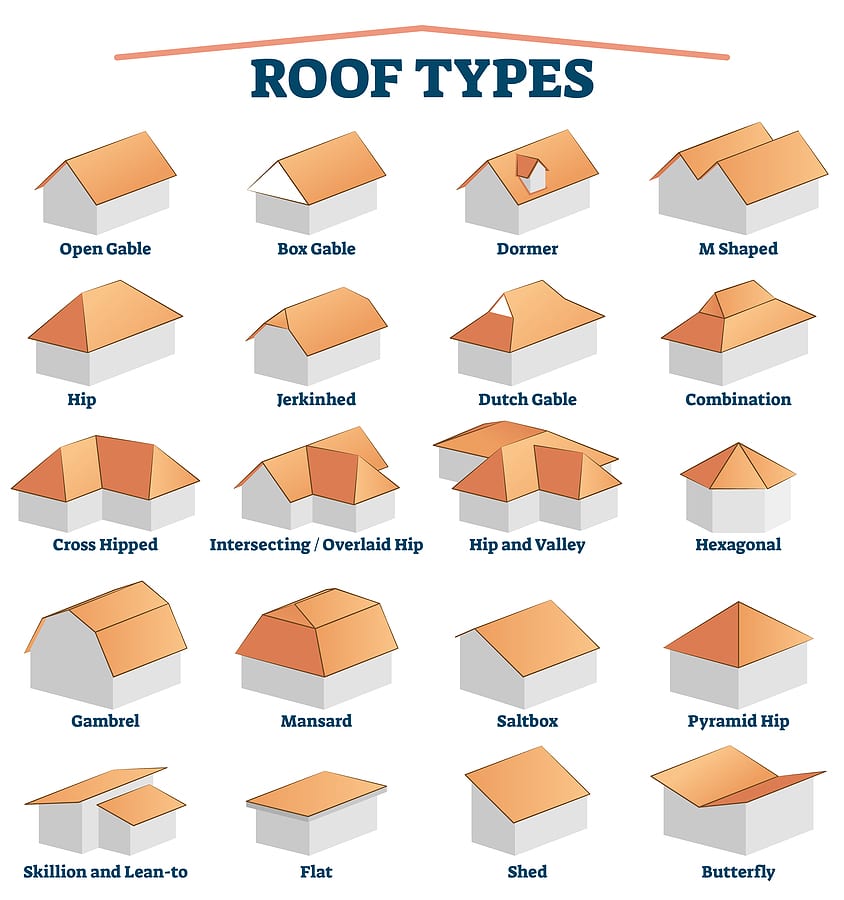 The exact cost will depend on a number of different factors, including the type of shingles used, the size and style of the roof, and any waste and disposal fees added. The best way of finding out how much a hip or gable roof might cost you is to contact us today for an individual quote, but in the meantime here are some averages to consider.

Many contractors also offer payment plans designed to help you manage the cost of your roof replacement, so your decision should always come down to what is best for your property.

When Should I Replace My Roof?

A new roof is a big investment so it is useful to know what warning signs to look out for to know that the end of your current roof’s life is coming.

If your roof is leaking or sagging, this is a clear indication that you need to install a new roof as soon as possible. Go into your attic to check for signs of moisture. To check for cracks turn the lights off and look up. If you can see light coming through then it’s time to call the professionals.

Another key thing to look out for is your heating bills. If your energy costs are going up every winter then it could be a sign of compromised roof insulation. Investing in a new roof will actually save you money in the long run in this case.

Finally, if your roof is growing excess algae or moss, is more than 20 years old, or if you notice other people in your neighborhood starting to replace roofs, look into getting a replacement.

Neighbors tend to carry out roof replacements at similar times, so this is a good measure. If you have no idea how old your roof is, arrange an inspection.

Now you understand the pros and cons of each roof style, it’s time to work out which works for you. There are lots of reasons to opt for both hip and gable roofs, so take your time and work out the costs before starting any work.

To find out more about the roofing cost for each type and to further discuss which option is best for your home, get in touch with us today for a free quote!